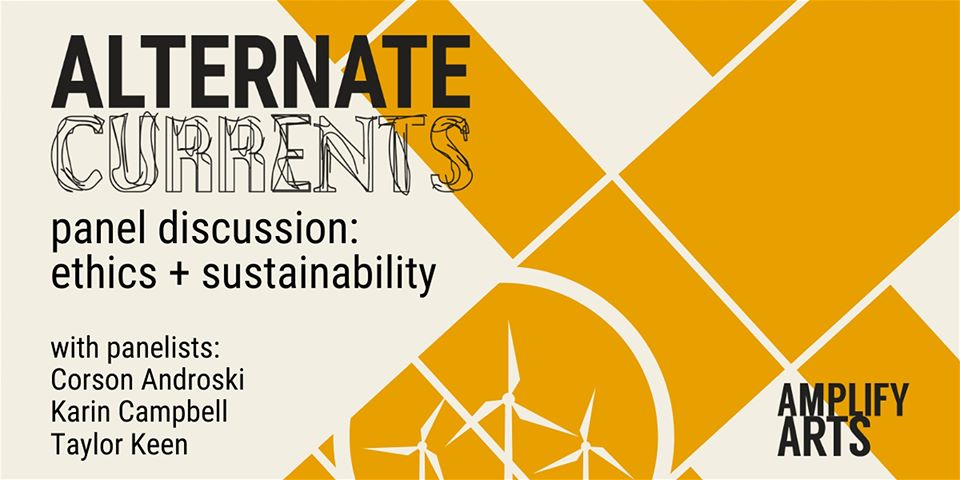 Throughout 2020, Alternate Currents will work to examine the intersection of creative practice and climate change. Jumping in head first, we’re taking a hard look at approaches that move beyond aesthetic gestures to forefront ethically sensitized modes of making informed by interdependent environmental and political ecologies. In a considered effort to move away from heroic narratives that pose quick and easy solutions to systemic challenges, we hope to make the case (both on- and off-line) for art and culture as useful tools that foster critical discourse and stimulate reflection, investigation, and meaningful action.
With that goal in mind, the first AC lunch-time conversation of 2020 brings together Artist and Researcher, Corson Androski; Phil Wilson Curator of Contemporary Art at Joslyn Art Museum, Karin Campbell; and Educator and Founder of Sacred Seed, Taylor Keen for a candid discussion about how a changing climate shapes ethical concerns which invigorate creative practitioners’ reevaluation of social responsibility, sustainability, and limits to growth in the new “green” economy. Bring lunch, come with questions, and join the conversation.
Alternate Currents opens space for conversation, ideation, and action around national and international discussions in the arts that have a profound impact at the local level. Alternate Currents exists both on- and off-line in the form of a dedicated online resource and lunch-time conversation series.
You can read up on the panel topic with the online resources found on the Alternate Currents blog page: www.amplifyarts.org/alternate-currents
Free and open to the public. This program is presented with the support of the Nebraska Arts Council and the Nebraska Cultural Endowment.
About the Panelists:
Corson Androski: Corson Androski is a researcher, conservationist, software developer, and photographer/filmmaker from Hutchinson, Kansas. Their work uses the concept of care (as labor, affect, and ethic, given/received by humans and other-than-humans, individuals, and systems) to consider emergent communities of illness alongside informal conservation of the small, overlooked ecosystems of weeds and fungi that spring up in the seams of our patchwork flyover state. Corson was awarded one of Amplify’s Artist Support Grant recipients in 2019 and is an Alternate Currents Working Group Member in 2020.
Karin Campbell: Karin Campbell is the Phil Willson Curator of Contemporary Art at Joslyn Art Museum. She completed her BA in art history and political science at the College of the Holy Cross, Worcester, MA in 2006 and her MA in curatorial studies at the Center for Curatorial Studies, Bard College, Annandale-on-Hudson, NY in 2011. Since joining Joslyn in 2012, Campbell has curated several major temporary exhibitions, including Word/Play: Prints, Photographs, and Paintings by Ed Ruscha and the traveling survey Sheila Hicks: Material Voices. In addition to overseeing the Museum’s collection of postwar and contemporary art, Campbell is the principal curator for Joslyn’s Karen and Doug Riley Contemporary Artists Project Gallery, the first space in the museum’s history dedicated specifically to living artists.
Taylor Keen: Taylor Keen is a full time instructor in the Heider College of Business Administration in Strategy and Entrepreneurship. Keen is also the Founder of Sacred Seed, a not-for-profit entity whose mission is to propagate tribal seed sovereignty, battle for tribal sacred geography and the seek cultural revitalization among tribal peoples. Currently, Keen is embarking on a journey with indigenous seeds of the upper Missouri River tribes to grow, harvest and celebrate the cosmology of the 4 Sisters (corn, bean, squash, and sunflower). Additionally, from his book-in-progress, he incorporates teachings of the sacred masculine / feminine of tribal peoples including the cosmology of Mother Corn and the Earth Mother goddess. Keen holds a bachelor's degree from Dartmouth College as well as a Master's of Business Administration and a Master’s of Public Administration from Harvard University, where he served as a Fellow in the Harvard Project on American Indian Economic Development. Taylor is the author of the book-in-progress entitled "Rediscovering America: Sacred Geography, the Ancient Earthen Works and an Indigenous History of Turtle Island”. Keen is Trustee Emeritus of the Nebraska State Historical Society, Board member Emeritus of the Humanities Nebraska, and Chairman Emeritus of the Blackbird Bend Corporation (The Omaha Nation of Nebraska and Iowa’s Economic Development Corporation).

Amplify Arts is a 501c3 nonprofit that promotes unity, innovation, and progress in the arts to build strong and vibrant communities.

Other Arts and Culture

Get Weekly Updates of the Best Events in Omaha!
Sign Up